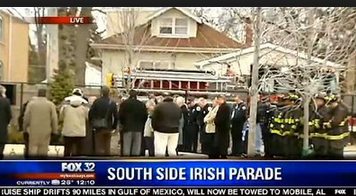 South Side IrishWritten byBlack, McEldowney & Walsh, copyright 1984We're the Windy City Irish-where the crack is always bestWhere every day is Paddy's Day and everyone's a guestIf you're Irish on the North Side or Irish on the WestWelcome to the South Side come join the Irish Fest!Chorus:We're the South Side Irish as our fathers were beforeWe come from the Windy City and we're Irish to the coreFrom Bridgeport to Beverly from Midway to South ShoreWe're the South Side Irish-Let's sing it out once more!Our parents came from Mayo, from Cork and Donegal.We come from Sabina, St. Kilian's and St. GallSt. Leo, Visitation, Little Flower and the rest.The South Side parishes are mighty-they're the best!ChorusWe live on the South Side-Mayor Daley lived here tooThe Greatest Irish Leader that Chicago ever knewand he was always proud of his South Side Irish roots!So here's to His Honor to his memory we'll be true.ChorusWe sing the songs our fathers sang when they were growing upRebel songs of Erin's Isle in the South Side Irish Pubsand when it comes to baseball-we have two favorite clubsThe Go-Go White Sox... and whoever plays the Cubs!

We Were Never That Young

With Peter Stookey of Peter Paul and Mary

Students Abducted By Flying Saucer in 1966

Returned After 50 Years From Flying Saucer

No One Had Aged

Facebook - Our Pages - Why So Many? We Are Elderly and Confused

facebook.com/MorganParkHighSchool
(For All MPHS Graduates)

facebook.com/MorganParkHighAlumni
(For All MPHS Graduates)

Drag Race in the Hood

Our EMPEHI Astronaut Dancing With Students

If you wish to add or delete photos or content or to let me know something is incorrect please email:
Craig Hullinger MPHS Jan 1966
morganparkhigh@gmail.com
or
Craighullinger@gmail.com